Originally published in Battle of Ideas.

From Metropolis through to recent hit film Ex Machina, concerns about intelligent robots enslaving humanity are a sci-fi staple. Yet recent headlines suggest the reality is catching up with the cultural imagination. The World Economic Forum in Davos earlier this year hosted a serious debate around the Campaign to Stop Killer Robots, organised by the NGO Human Rights Watch to oppose the rise of drones and other examples of lethal autonomous warfare. Moreover, those expressing the most vocal concerns around the march of the robots can hardly be dismissed as Luddites: the Elon-Musk funded and MIT-backed Future of Life Institute sparked significant debate on artificial intelligence (AI) by publishing an open letter signed by many of the world’s leading technologists and calling for robust guidelines on AI research to ‘avoid potential pitfalls’. Stephen Hawking, one of the signatories, has even warned that advancing robotics could ‘spell the end of the human race’.

On the other hand, few technophiles doubt the enormous potential benefits of intelligent robotics: from robot nurses capable of tending to the elderly and sick through to the labour-saving benefits of smart machines performing complex and repetitive tasks. Indeed, radical ‘transhumanists’ openly welcome the possibility of technological singularity, where AI will become so advanced that it can far exceed the limitations of human intelligence and imagination. Yet, despite regular (and invariably overstated) claims that a computer has managed to pass the Turing Test, many remain sceptical about the prospect of a significant power shift between man and machine in the near future.  As technology writer Oliver Morton has noted, the fascination with robots as ‘immigrants from the future’ tends to overlook the extent that they reflect the concerns and anxieties of its contemporary inventors.

Why has this aspect of robotic development seemingly caught the imagination of even experts in the field, when even the most remarkable developments still remain relatively modest? Are these concerns about the rise of the robots simply a high-tech twist on Frankenstein’s monster, or do recent breakthroughs in artificial intelligence pose new ethical questions? Is the question more about from who builds robots and why, rather than what they can actually do? Does the debate reflect the sheer ambition of technologists in creating smart machines or a deeper philosophical crisis in what it means to be human?LISTEN TO THE DEBATE

Speech: Beyond the Crisis: Debating the role of innovation 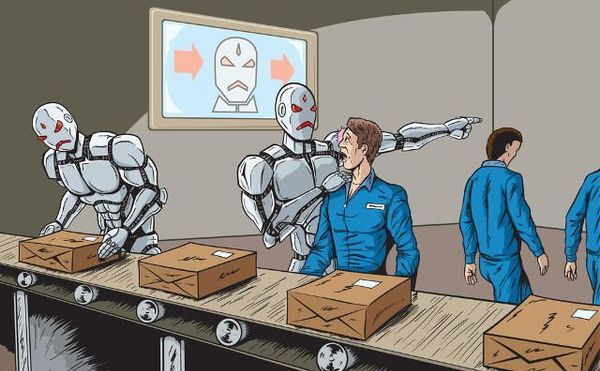